Six Impossible Things release new single and video for ‘me’ & announce upcoming Ep ‘sometimes you fall asleep in front of me’. 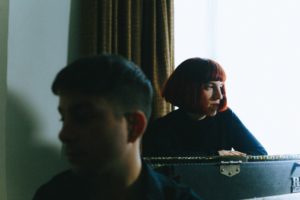 Hailing from the area of Milan, Italy, Six Impossible Things is a love affair – a dream pop duo embracing their undying passion for music and delivering slow-paced, hymnal songs that will undoubtedly resonate with fans of acts such as Phoebe Bridgers, Turnover, Tigers Jaw or Conor Oberst.
Today, November 26, the duo unveils the first snippet of an upcoming chapter that will see them return to touring across Europe and past the pond for the first time to perform at Pouzza Fest in Canada. Lead single “me” unashamedly blends the vocal prowess of both band members Lorenzo Di Girolamo and Nicole Fodritto – one of the strengths that makes their songs stand out – and in the form of its music video, directed and recorded by Martin “Gingerdope” Wisniewska, it grants the viewer a look into what Six Impossible Things is all about.
The track is available on all streaming platforms, and the music video can be seen on YouTube.

The new single comes with the announcement of the band’s upcoming EP “sometimes you fall asleep in front of me”, due out on February 5th, 2021 via Tanzan Music. The 5- track effort follows their previous EP “I Tried To Run Away From Here”, and was recorded by Dom Wright at The Ranch Production House in Southampton in early 2020, and
mastered by Dan Coutant.

“I wrote the lyrics for ‘Me’ in the space of a few minutes one evening, while sitting in the car in front of my house. That was not an unusual occasion, back then – I think the lyrics in the chorus are quite representative of those times – ‘every night I try to find a reason why I’ve become so lost, while I sink beneath my bedsheets’” shares guitarist and vocalist Lorenzo Di Girolamo.
On finally being able to release a song that was recorded almost 10 months ago, lead vocalist and keyboard player Nicole Fodritto comments “I can’t believe we finally get to share it! I’m especially excited for people to see the video – once we had finished recording at Ranch Production House in Southampton, we went to this AirBnB we rented for the day to film it with our friend Martin Wisniewska. She absolutely killed it!”

Pre-orders for the EP will be available soon. In the meantime, you can follow Six
Impossible Things on social media: